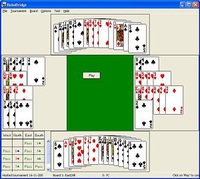 RoboBridge is for Robot Play only and free of charge. The bridge engine is the same used in the RoboBridge program, which has competed in the World Computer Championship, placed 4th as best in 2017.

RoboBridge is available for Window browsers with an app or stand alone.

RoboBridge lets you compose your own convention card. Possible base cards to choose from: